Make It ‘Til You Make It

This cliché is a bit too much for me. Faking it doesn’t lead to making it, it leads to fake results.

Rather than attempting to make it by faking it let’s switch things up. I’d prefer to say: Make It ‘Til You Make It!

I want to give you an example of making it ‘til you make it.

My home here in China is Guangzhou in the Guangdong Province. Guangzhou is a remarkable city. In 5 years it has gone from poverty stricken to one of the fastest growing metropolis in the world.

Having said that it still has its problems. For a city with such huge amounts of urban development the poverty levels remain far too high.

Guangzhou Nan Zhan (Guangzhou South Station) is one of the newest advances in Guangdong Province. China is developing a network of railways that connects the country with a focus on Guangdong. These high-speed trains are the fastest in the world and will make it possible to travel throughout Guangzhou, Shenzhen, Hong Kong, and other major manufacturing hubs. It currently connects all the way to Beijing, making it the longest high-speed railway in the world.

Take a look at the station:

At first look you think you’re taking a peak at a new space station right?

Having stepped inside I can attest to the jaw-dropping and overwhelming feeling of walking into a train station that’s bigger than your average airport.

I constantly hear Chinese citizens talking about the grandiose infrastructure that continues to grow each day while the basic fundamentals of the country are still lacking.

The train stations are right beside some of the poorest areas I’ve seen in where the rich to poor disparity is unbelievable.  These huge stations don’t even provide that many employment opportunities.

So how then is this a good example of making it until you make it?

I’m under the impression that this attitude of aggressive expansion by the Chinese government will help raise the lower class out of poverty and improve upon basic needs.

It has already begun to change the people’s mindsets. The people are proud of their country’s growth. This shines through in the local people’s ability to grow (although slowly) their local businesses.

In the last two years I’ve seen everything go up in price. People see the huge developments and feel the necessity to raise prices. Everything from food stands to motorcycle rides are more expensive.

The Chinese government has injected a national patriotism that inspires people to take a stand and demand more of their lives.

The entire province has been pushed forward because of these developments.

Many people laugh at these imposing train stations and magnificent buildings that are built everyday throughout the country. They say that they are empty buildings that serve no purpose. They say the government focuses on the wrong things. They belittle the efforts of the Chinese growth.

However, wait 5-10 years and watch as the economy grows, people get out of poverty, and China becomes the most powerful country in the world.

Then, nobody will be laughing.

The point is: When you act bigger than you are while you are still little it trains you to fill bigger shoes and aim for the stars. 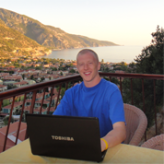